Minister for Defence Paul Kehoe, T.D. was at Wexford County Council Headquarterson Friday last 11 October where he presented the keys of a brand new jeep to Wexford Civil Defence.  The €34,000 4 x wheel drive Ford Ranger Crew-Cab was specifically selected for its capacity to deal with the often challenging conditions faced by Civil Defence crews as they assist in the response to national emergencies and severe weather events.

The jeep is part of a major upgrade of the national Civil Defence fleet which has seen the provision of 16 such jeeps to Civil Defence crews in Cavan, Clare, Cork West, Donegal, Dublin, Galway, Kerry, Kilkenny, Limerick, Louth, Mayo, Meath, Monaghan, Offaly, Sligo and Wexford. The funding was provided by a €500,000 allocation from the Government’s Dormant Accounts fund.

The business case for the vehicle upgrade made to the Department of Community and Rural Development was based on the fact that many of the activities carried out by Civil Defence during the recent severe weather events took place in rural, isolated areas and/or in disadvantaged areas of the large urban centres, with prioritisation of allocation of new vehicles focused on local authorities covering these areas.

During Storm Ophelia in October 2017 and Storm Emma in March 2018, the Wexford Civil Defence fleet of four-wheel drive vehicles was utilised in carrying out a variety of tasks, such as assisting local authorities, the HSE and the National Ambulance Service and An Garda Síochána.. During the highly adverse weather conditions of Storm Emma, Civil Defence volunteers assisted dozens of vulnerable people throughout the county who found themselves snowed in. They were also involved in transporting patients and carers, evacuating people from their homes and delivering meals.

Wexford Civil Defence Officer Peter O’Connor welcomed the allocation of the new jeep to Wexford. “This much-needed 4-wheel drive jeep will be a highly valuable resource for Wexford Civil Defence in times of emergency as our crews work to keep people safe” said Peter. “Its provision is also an important acknowledgement of the work of our volunteers and their ongoing commitment to Civil Defence” he added.

Wexford County Council Civil Defence currently has 136 active Volunteers, of which 34 were recruited in 2019, while a new unit was also established in Enniscorthy in 2019. The Wexford Civil Defence vehicle fleet consists of eight 4x4s, four ambulances – one based in each of the four main towns – together with two minibuses and one Incident Control Vehicle.

In 2018 Wexford Civil Defence provided assistance to more than 100 community events throughout County Wexford, while the work of its volunteer crews during Wexford’s coordinated response to Storm Emma and Storm Ophelia earlier that year has been locally and nationally recognised and applauded. Civil Defence volunteers are highly trained and provide valuable assistance to the Principal Response Agencies (local authorities, an Garda Siochána, HSE and Ambulance Services) during times of emergency. New volunteers are always welcome. If you would like to consider joining Wexford Civil Defence, contact cdo@wexfordcoco.ie for more information.

This follows intensive engagement since earlier this year, between officials from the Department of Defence, from Local Authorities represented by the County and City Management Association and from PHECC.

Civil Defence’s current licence was due to expire at the end of November 2018. Following an application by the Department of Defence and subsequent discussions with PHECC, this was extended to 30th July 2019 and subsequently again to the 31st August 2019.

The delay in submitting a completed licence application arose from a review by the Department of Defence of the Statutory Declaration which is an intrinsic element of the licence application. That review identified that some assurances and details required as part of the licensing process were not within the control or remit of the Department of Defence, as responsibility for day to day Civil Defence operations rests with Local Authorities, as set out in the 2015 Government White Paper on Defence.

The Minister commented that he is satisfied to see the issue has been resolved through constructive engagement between all three organisations. In particular, he noted, “management and Civil Defence personnel representing Local Authorities have a crucial role to play in terms of Civil Defence and I look forward to continued close engagement between my officials and officials representing Local Authorities”.

He added “I would like to thank officials from PHECC for their co-operation and support in resolving this issue and I look forward to continued positive engagement between my Department and PHECC, on a range of issues”.

He concluded by stating “I am very conscious that Civil Defence volunteers have been anxious about this issue and I would like to thank them for their patience”. I wish to assure them that with the licence issue now resolved, the organisation can continue to deliver the professional level of emergency medical service that it is renowned for”.

Volunteers from Wexford Civil Defence attended a Search Skills Exercise in Carrigbyrne on Sunday. We had volunteers from Enniscorthy, Gorey, New Ross and Wexford Units. Volunteers were introduced to the new Search Responders course searching techniques, Communications vehicle and procedures to take into consideration for a possible crime scene. Thanks to all the volunteers and Instructors for attending. 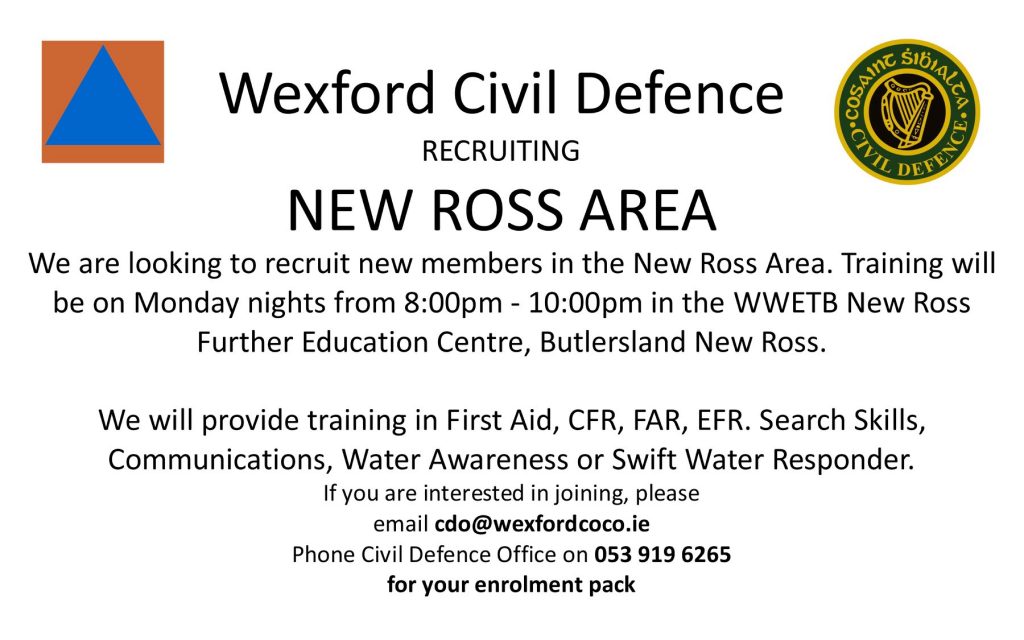 Welfare Unit we require people who would be interested in training for catering for large groups, HACCP and food preparation, ideal for anyone involved in clubs.

The theme for the day was back to “Basics”, looking at the quality of the work opposed to the quantity, with four separate scenarios on the day to challenge the skills of the volunteers:

The Civil Defence Welfare Service provided food for the volunteers, casualties and Instructors throughout the day.

Cathaoirleach of Wexford County Council Councillor. Keith Doyle thanked all Wexford Civil Defence volunteers for their help and support during Storm Emma and congratulated them on their continuing and valued contribution to the people of County Wexford during the year through their attendance at dozens of community events and other exercises.

The volunteers from the county made a presentation to newly-appointed Civil Defence Officer Peter O’Connor to mark his promotion – the presentation consisted of a group photo and a bouquet of flowers to his wife Pamela. 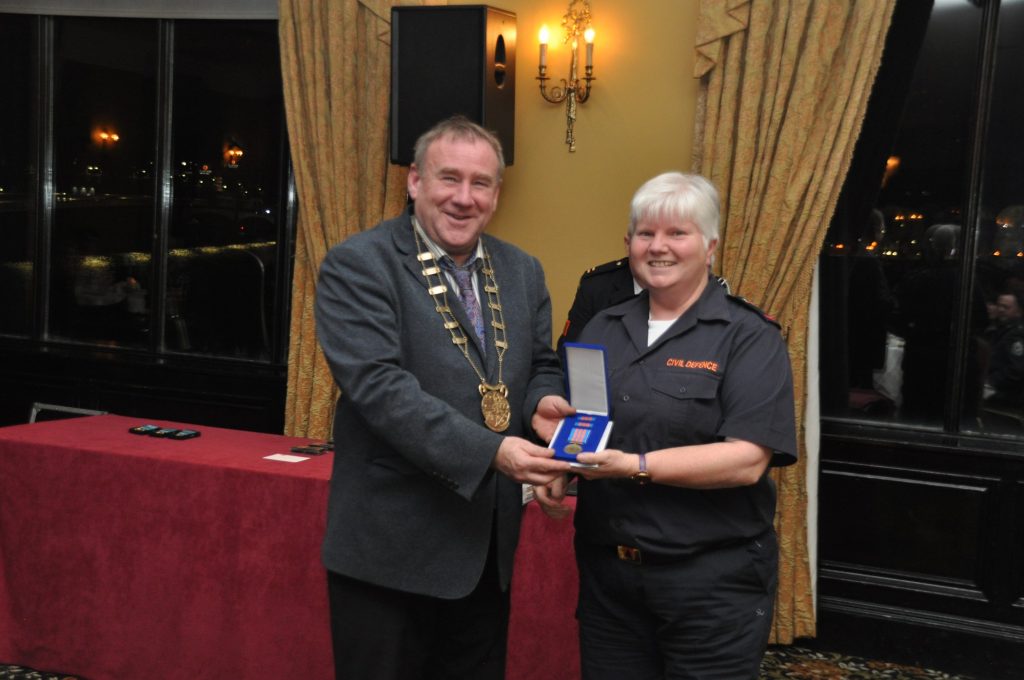 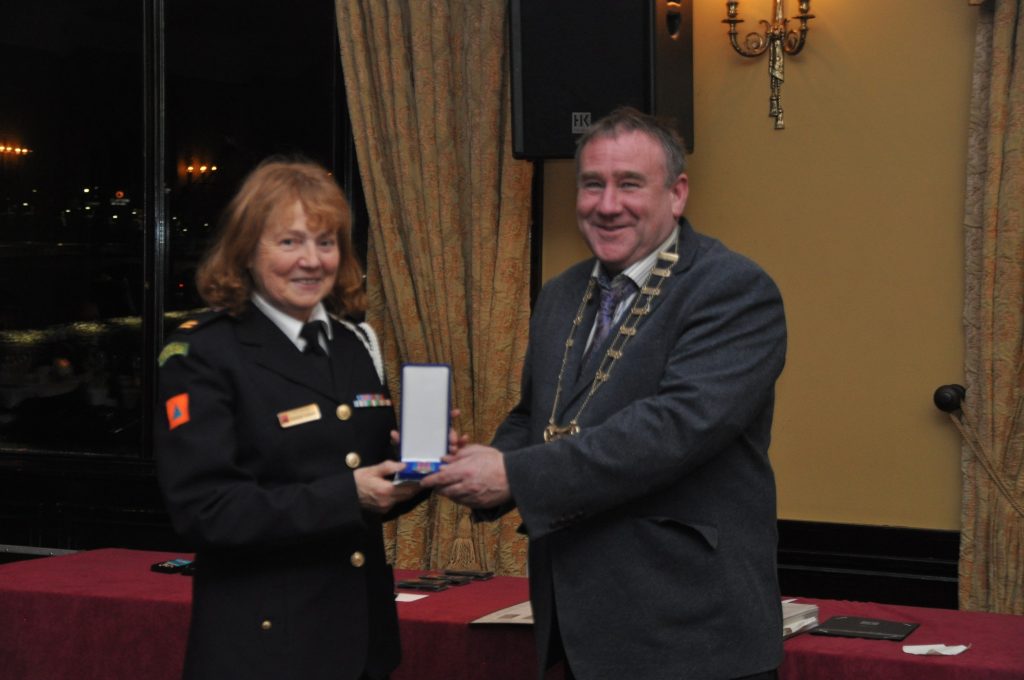 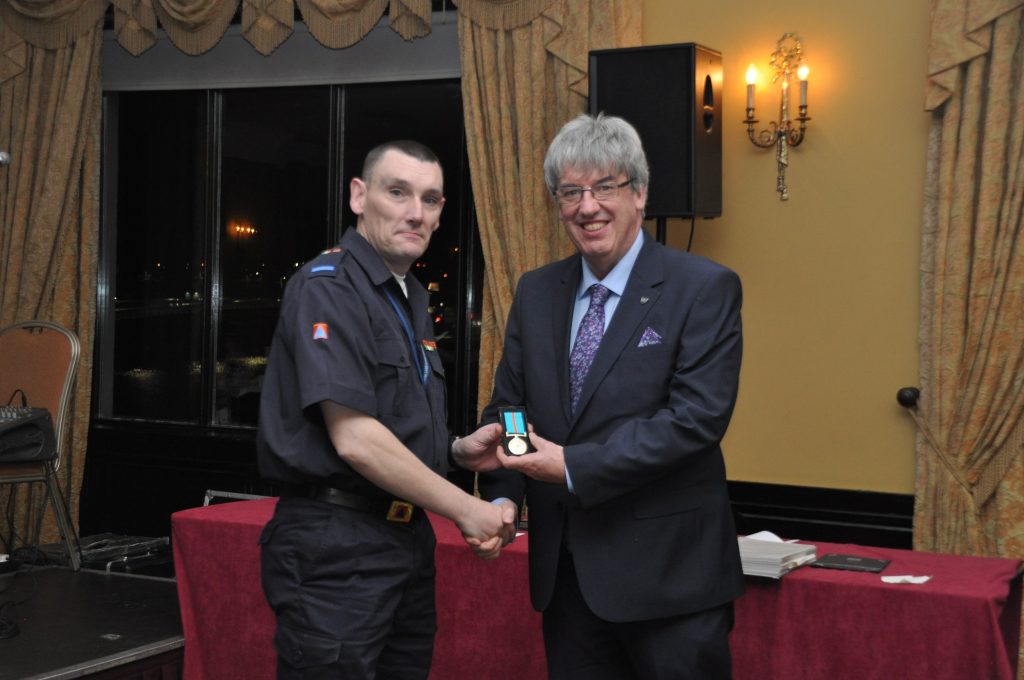 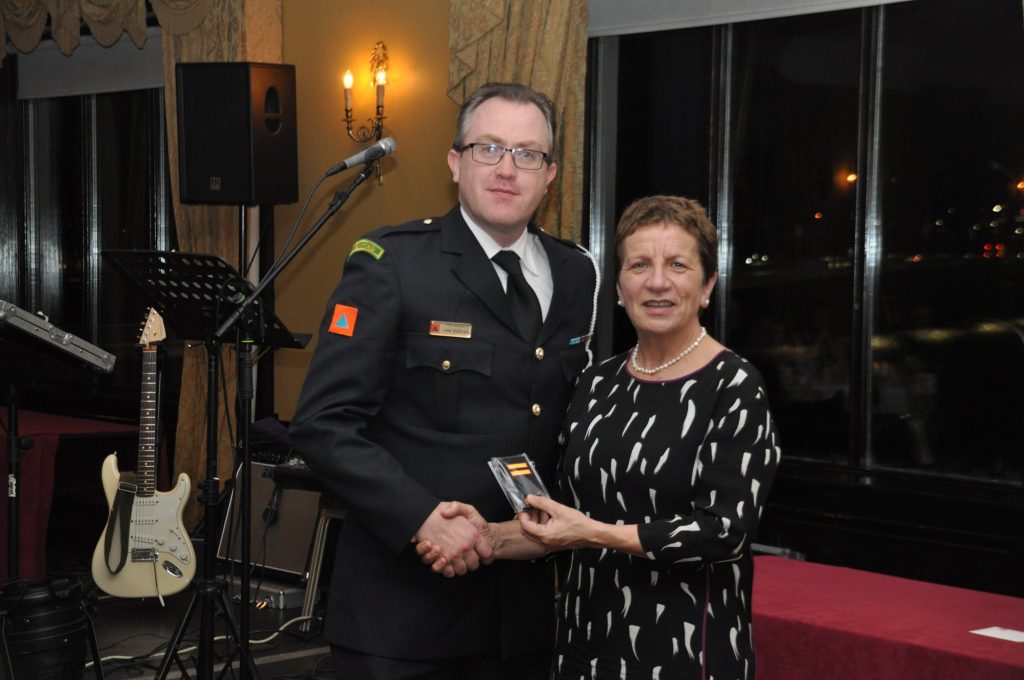 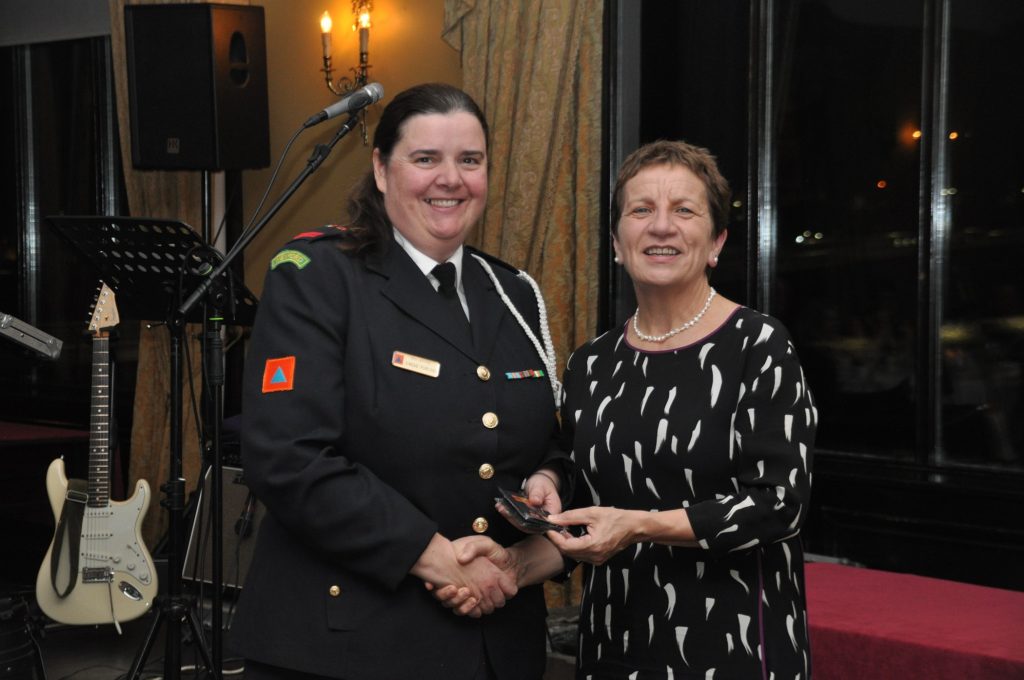 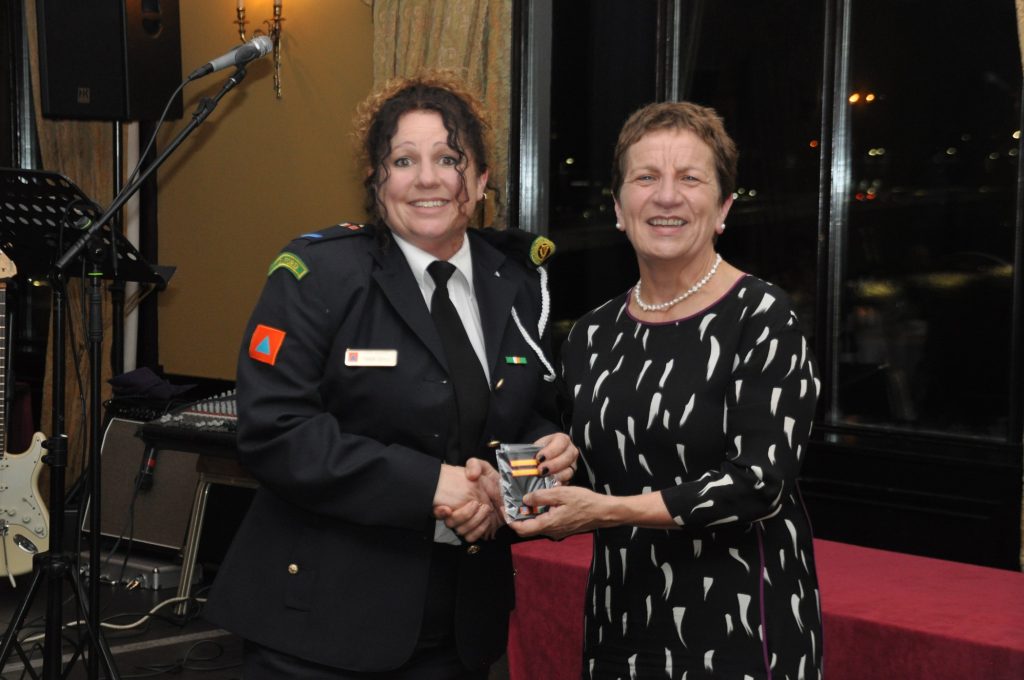 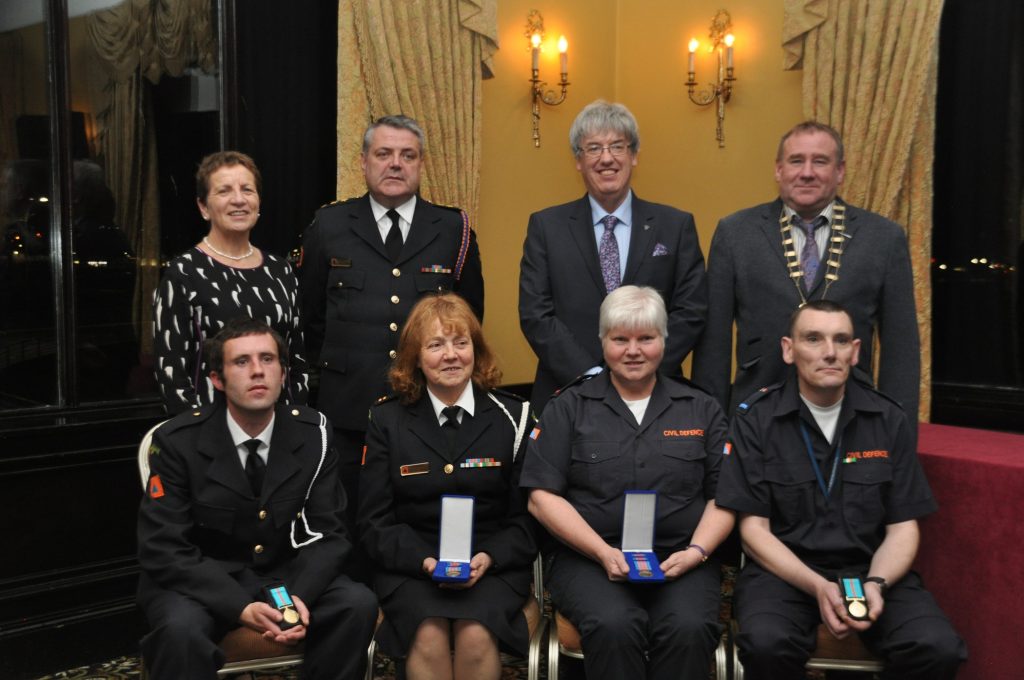 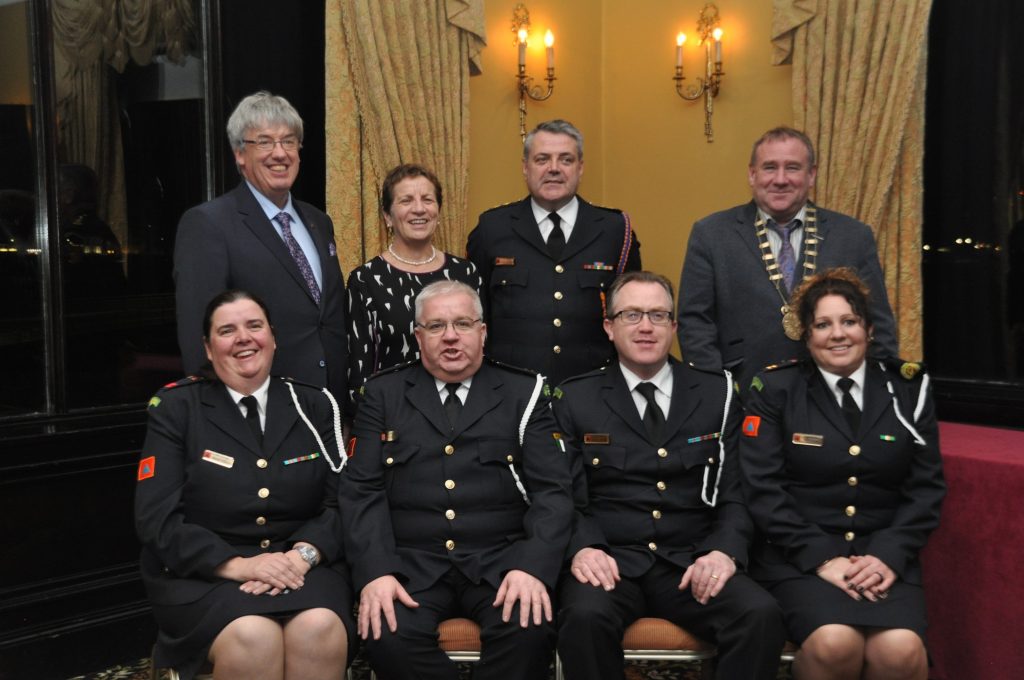 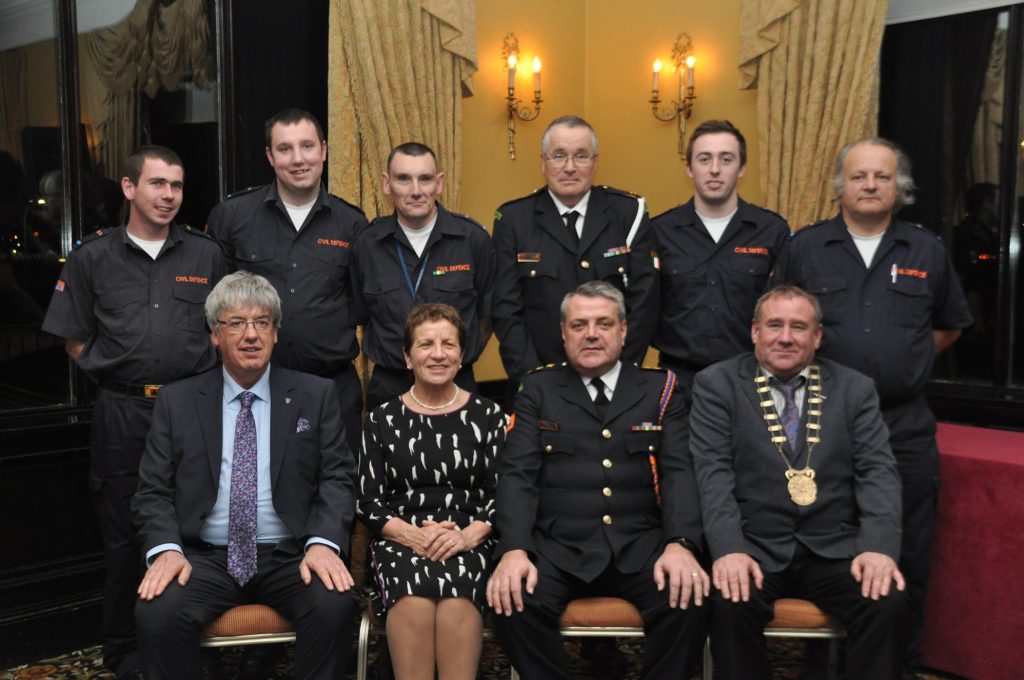 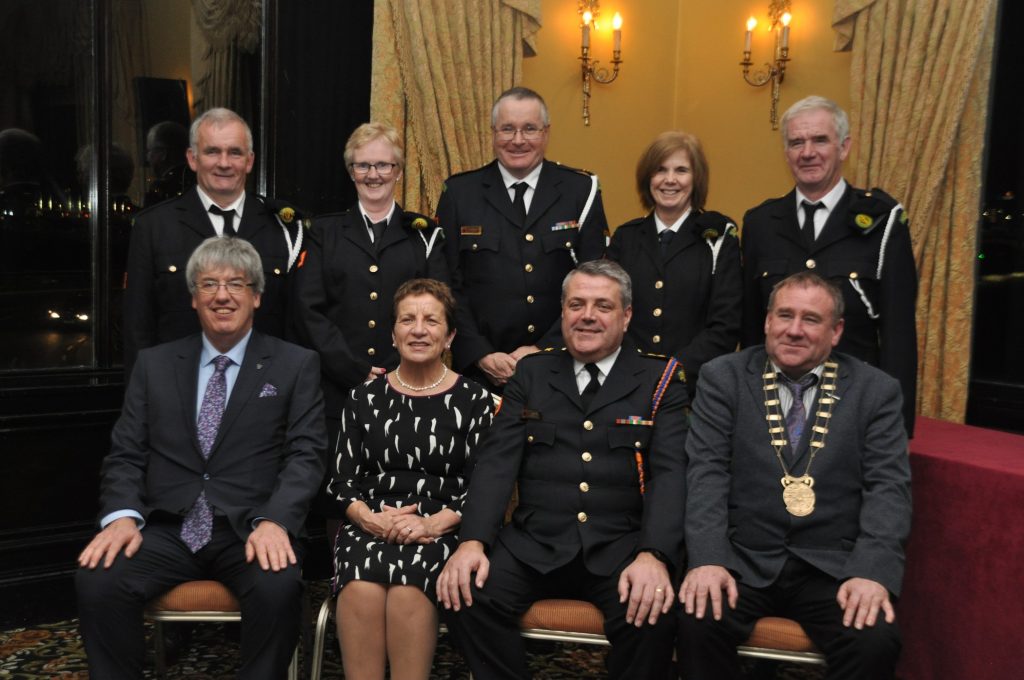 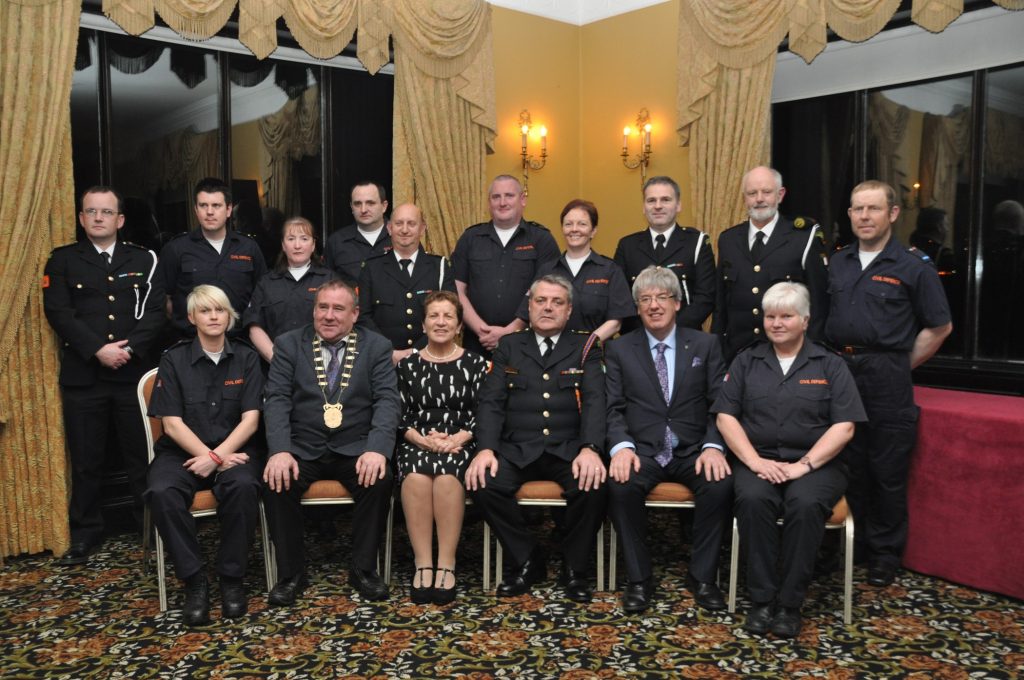 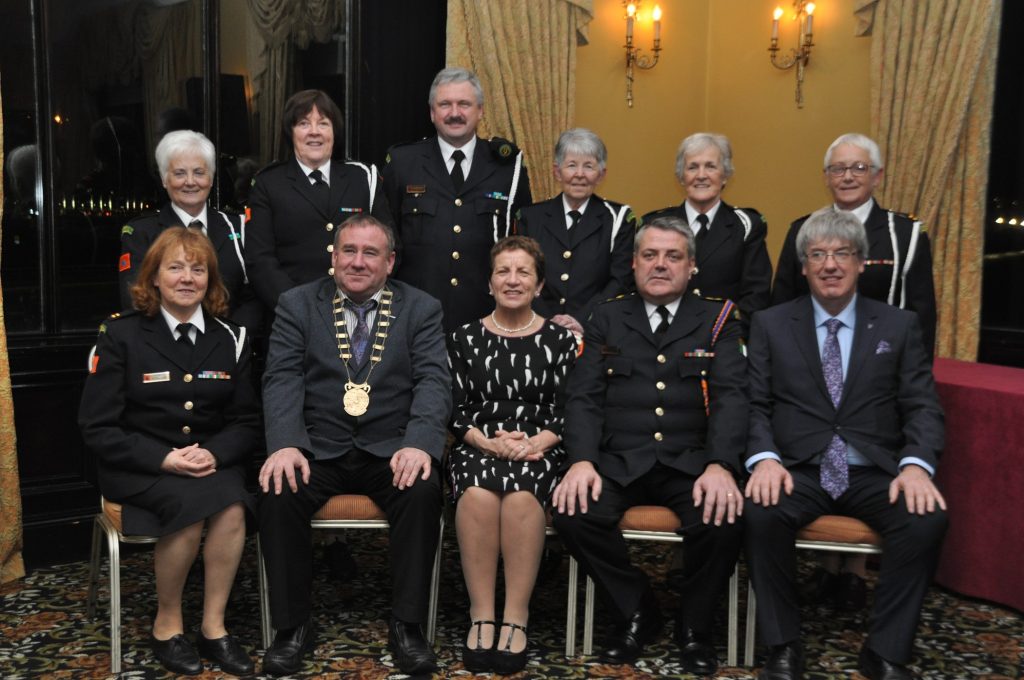 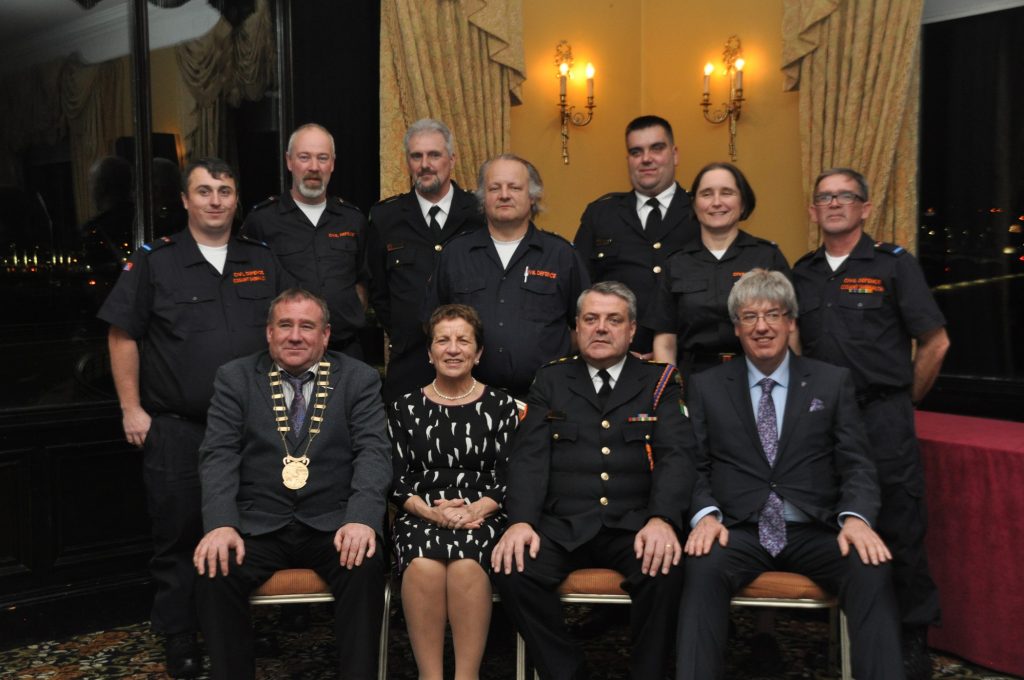 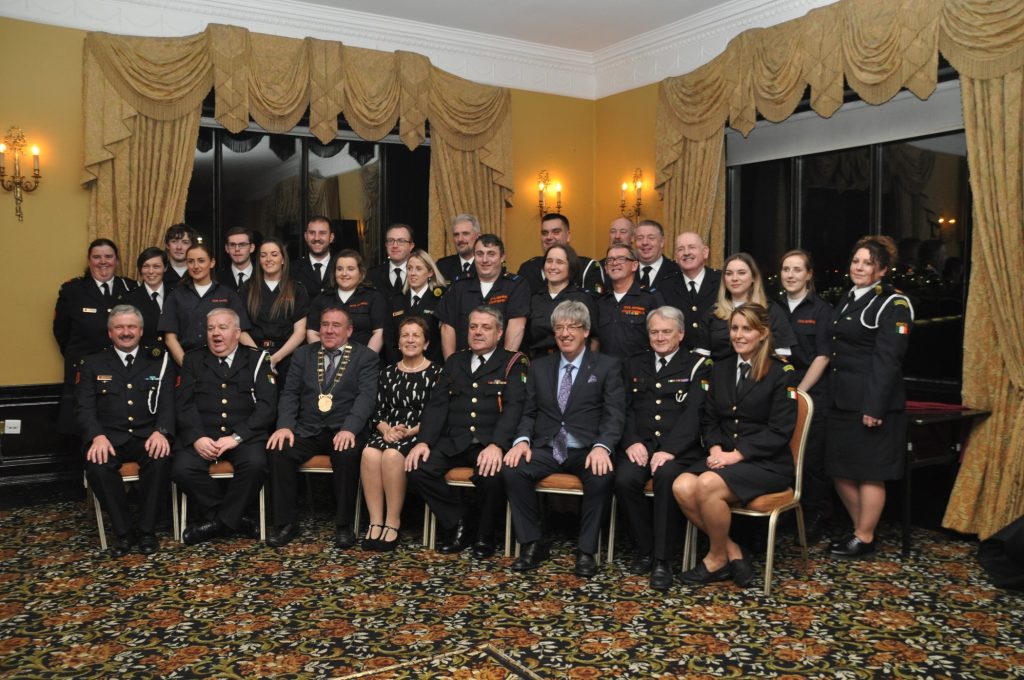 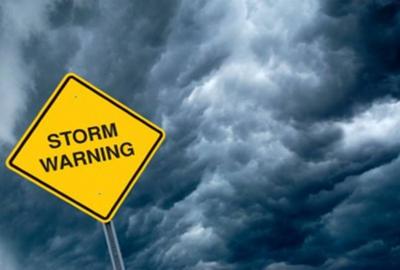 Wexford County Council’s Crisis Management Team met earlier today to review preparedness for Storm Callum. The meeting was attended by senior staff of the Council and also by representatives of an Garda Siochana.

Wexford County Council has considerable experience in managing severe weather events and we wish to assure the public that we taking all steps necessary to ensure public safety and minimise disruption during this severe weather event. Our preparations include:

•    erection of flood defence barriers in Wexford, New Ross, Arthurstown and Ballyhack
•    filling and stockpiling of 5000 sandbags for use if required
•    civil defence – personnel and equipment placed on standby
•    continuous cleaning of gullies and shores to minimise local flooding
•    additional call centre staff on standby to deal with emergency calls
•    fire services and local emergency crews placed on standby
•    provision of additional beds at Ozanam House, Wexford, to accommodate persons currently “sleeping rough”
•    contact with ESB Networks in the interest of continuity of electricity supply to key public infrastructure

Storm Callum and the associated Orange Weather warning is a significant weather event and members of the public should not be complacent in their preparations for the storm, with the most severe weather forecasted to pass through Wexford between 10am tonight and 9am tomorrow.

•    Avoid unnecessary travel, especially at the height of the storm
•    If you must travel, exercise extreme caution – expect the unexpected – especially localised flooding, falling/fallen debris and on-coming vehicles veering across the road
•    Stay away from the coast and from exposed piers, harbours and cliffs during the storm Do not risk your own life or the lives of the emergency services who may have to attempt to rescue you, by visiting these areas

Remember, if you wish to report an emergency to Wexford County Council you can do so as follows: 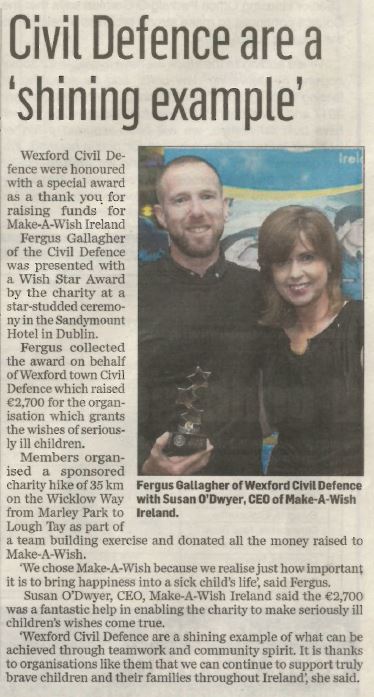 What a great day in Croke Park yesterday. Here are a small few photographs from the day with more to come:
https://www.flickr.com/photos/civildefence/albums/72177720304082855
Also a link to the Irish Examiner news report on the event: https://www.irishexaminer.com/news/arid-41017802.html
https://www.civildefence.ie/covid-19-medal-presentation-ceremony-in-croke-park/ #civildefencemedals #civildefence

A view of Civil Defence activities during out the COVID19 Response, proud of the contribution made by our volunteers
@wexfordcoco @WexfordVC #civildefencemedals #volunteer

Minister @simoncoveney has honoured the role played by Civil Defence volunteers during the Covid-19 pandemic. He was delighted to present a specially designed medal to the first recipients of almost 1,500 members at a ceremony in @CrokePark today. @LocalGovIre @HSELive @gardainfo